What is Transcranial Magnetic Stimulation (TMS)? 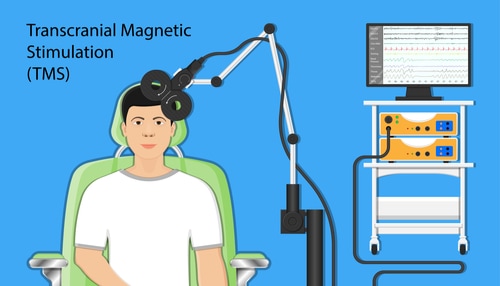 What is Transcranial Magnetic Stimulation (TMS)?

More than 17 million American adults are affected by major depressive disorder, which for simplicity we can simply refer to as depression. Depression is a diagnosable mood disorder that brings about symptoms like intense sadness, loss of energy and appetite, and lack of interest in things that used to bring the patient happiness and satisfaction.

If left untreated, depression leads to other health complications, including suicide. Much of the time, physicians prescribe antidepressants to treat depression. Other treatments, such as therapy and improved diet and exercise habits, can enhance the effectiveness of antidepressant medications.

Many times, however, patients do not respond to antidepressants. In recent years, Transcranial Magnetic Stimulation (TMS or rTMS) has gained prominence as a safe, well-tolerated treatment option for patients with depression who have either not responded to antidepressant medications or cannot tolerate antidepressants due to the side effects. The Federal Drug Administration (FDA) cleared TMS in 2008, and it is now a widely available treatment option at hospitals and clinics across the United States. 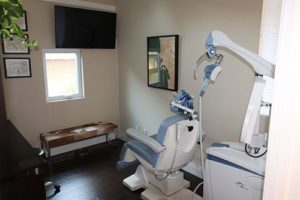 What is transcranial magnetic stimulation (TMS)?

TMS treatment is a non-invasive method of brain stimulation. It relies on electromagnetic induction that is transferred through an insulated coil, which is placed over the patient’s scalp. It’s then focused on an area of the brain clinicians believe plays a role in mood regulation. The coil delivers brief magnetic pulses that pass painlessly through the skull and into the patient’s brain. The pulses are the same type and strength as the ones generated by magnetic resonance imaging (MRI) machines. Because treatment involves administering these pulses in rapid succession, it is known as “repetitive TMS” or “rTMS” and produces longer-lasting changes in brain activity.

Some clinics and hospitals now offer a variant of rTMS called Deep Transcranial Magnetic Stimulation (dTMS) that uses an H-coil, a new type of coil that delivers direct stimulation to deeper and larger brain volumes. This coil affects more extensive neuronal pathways, including those deep cortical regions and fibers that target subcortical regions. It does so without significantly increasing the electric field that is induced in the superficial cortical layers.

During a TMS treatment session, the doctor or technician places an electromagnetic coil against your scalp and near your forehead. The electromagnet delivers a painless magnetic pulse that stimulates your nerve cells in that region of your brain that controls mood and depression. rTMS activates regions of the brain have experienced a decrease in activity due to depression.

While researchers have yet to understand how rTMS works completely, they have observed how the stimulation impacts how the brain is working. This, in turn, seems to ease depression symptoms, improve mood, and aid the patient in resuming normal activities. As the medical community learns more about the procedure, they will recommend different ways to perform TMS therapy to increase its effectiveness.

TMS or rTMS may be a safe, effective, and non-invasive option for people with depression who have not seen improvement with medication alone. While TMS is also used to treat Obsessive-Compulsive Disorder (OCD), Post Traumatic Stress Disorder (PTSD), and other mental health conditions, it has seen more success in the treatment of depression.

The reason for its popularity is that TMS requires no sedation. Further, it’s completely non-invasive and pain-free. The procedure is safe, with less than a 0.1% risk of seizures or loss of consciousness. The occurrence of other side effects is relatively low as well.

Patients who receive TMS treatment go four to five times a week for four to six weeks. A treatment session lasts about 40 minutes. A newer form of TMS is theta burst stimulation, which received FDA approval within the last year. Sessions for this version of TMS only last about ten minutes.

Approximately 20% – 40% of depressed patients don’t find relief from antidepressants or other psychotherapeutic interventions. Even with treatment, they remain chronically depressed. In these cases, TMS shows promise for those in this group. Studies show that patients have as much as a 63% positive response rate from receiving rTMS.

In addition, response and remission rates after five weeks or more of treatment were over 70% and 41%. Overall, depression scores reduced by up to 50%. Some studies show that it reduces depression scores by up to 40% – 50%. In one study involving 204 patients, the event-free relapse rate of TMS therapy patients was 22.6% during the sixth month.

In addition to treating depression, TMS has proven to be effective for anxiety and other disorders related to anxiety like OCD and PTSD. TMS therapy can decrease anxiety scores by up to 33%, according to studies. Those patients also suffering from depression saw a 40% improvement in that area as well. Tension and fatigue levels also went down by about 44%. Overall, studies show a 23% improvement in patients who suffer from both anxiety and depression.

Another study yielded positive results in that 11 of 13 patients (or 84.6% of patients diagnosed with a generalized anxiety disorder) responded to TMS treatment and went into remission. Finally, a third study involving low-frequency TMS therapy reduced anxiety and panic symptoms in patients by as much as 78%.

Clinicians have used rTMS to treat depression, anxiety, and other disorders for more than 20 years. Most of the collective research has involved rTMS as a treatment for medication-resistant depression. Because it requires no sedation, the patient is awake during the outpatient procedure. The patient has no restrictions and can drive to and from treatment. Each session lasts for about 40 minutes.

rTMS has been proven to be safe as a stand-alone treatment or combined with antidepressant medication. While researchers are still conducting studies, it’s believed that rTMS may be more effective when also combined with psychotherapy. Research is ongoing in this area, as it is for the potential application for the other disorders discussed, such as OCD. Data from the mid-1990s to today tells us that there are no long-term side effects known for rTMS.

Theta Burst Stimulation (TBS) is a more recent version of rTMS. Theta bursts are shorter bursts of stimulation administered at high frequencies. The bursts are applied five times per second. The theory is that theta burst mimics the brain’s natural activity rhythm. There are two types of TBS therapy, which are continuous (cTBS) and intermittent (iTBS). Each one has a different effect on brain function. The FDA-approved iTBS can be performed in only three-minute treatment sessions and still has similar results as standard rTMS.

Deep transcranial magnetic stimulation (dTMS) is used to stimulate more significant, deeper regions of the brain. The FDA has approved its use for patients suffering from depression or OCD who have not found relief from other treatments. The dTMS procedure uses special coils that reach about 4 centimeters below the surface of the skull. They use a type of coil called H coils, which are designed to target different areas of the brain.

During a dTMS session, the patient wears a cushioned helmet that produces brief magnetic fields like those in MRI scans. Like the other versions of TMS, this is an outpatient procedure with few side effects. Daily sessions take about 20 minutes over a four to six-week time span. People can resume their normal activities immediately after completing a therapy session.

Researchers have found that TMS treatment and antidepressants can be combined for those patients who can tolerate the medication. One therapy augments the other, potentially optimizing results for the best possible outcome.

When successful, the combined treatments can reduce or even eliminate symptoms by correcting the chemical imbalance in the patient’s brain. Further, using antidepressants with TMS treatment can extend the effects of the latter.

rTMS differs from vagus nerve stimulation or deep brain stimulation in that it does not require surgery or any implantation of electrodes. It’s also vastly different from electroconvulsive therapy (ECT) in that it doesn’t cause seizures or require sedation through anesthesia. While this makes TMS treatment safe and easily tolerated, it can come with side effects.

Common side effects of TMS

Overall, the side effects of TMS are mild to moderate. If a patient experiences any side effects, they usually decrease as the sessions continue. Side effects include discomfort at the site of stimulation, headache and lightheadedness, and a tingling feeling or spasms (twitching) of facial muscles. We can adjust the stimulation level to reduce symptoms, and may recommend an over-the-counter pain medication such as ibuprofen before the procedure.

Anecdotal accounts are abundant from patients who state how long TMS has helped their severe depression. However, there was little research on the long-term effects of TMS until recently.

In 2013, 257 people participated in a TMS clinical study in which researchers observed them for a year. At the end of those 12 months, 69% of the patients experienced an improvement of symptoms, and 45% of them experienced complete remission

The significance of this study was that the positive outcomes of the TMS treatment surpassed those whose treatment using medication or ECT therapy produced far fewer effective results. While all three therapies showed effectiveness for acute depression, the long-term data for medication and ECT was disappointing. For example, only about 13% of the ECT patients remained in remission six months after treatment.

In 2015, a placebo-controlled trial appeared in World Psychiatry. It concluded that TMS was an effective treatment for patients with Major Depressive Disorder (MDD) who had not had previous success with antidepressants. What’s more, this study found that the more resistant the patients were to antidepressant medication, the stronger the effects of TMS. The positive results lasted an average of 16 weeks.

Sixteen weeks is a favorable result, though patients outside the study have reported that their TMS treatment was effective for an entire year.

Medscape Medical News published another study regarding the lasting effects of TMS therapy. In this study, 307 patients with treatment-resistant MDD received a standard course of TMS treatment for four to six weeks. After, they were tracked for over a year. The findings were that there was a statistically meaningful response to treatment as well as remission. Further, a large number of patients had continued relief from their MDD for a year after treatment ended.

This was the first time researchers tracked TMS patients for an extended length of time (beyond 12 months) to document long-term effects. Perhaps a greater significance is the fact that the extended relief patients experienced was more successful than the long-term effects of ECT therapy, which can cause memory and verbal loss. ECT poses higher risks due to anesthesia and other factors. So, the efficacy of TMS makes it a more favorable treatment for depression.

How long do the effects last?

While the above studies reported that the long-term effects of TMS lasted up to a year, this is not a uniform, one-size-fits-all solution for depression. Several factors influence depression in each patient. Thus, each patient will have a different response to treatment. Many times, the standard four to six-week course of treatment will provide the patient remission that lasts for six months or more.

Sometimes, a patient will require TMS maintenance sessions to prolong their remission period. Patients may be placed on a post-TMS treatment schedule for a single session each month for a specified duration.

TMS is under ongoing study, not only for depression, but also for OCD, and anxiety.